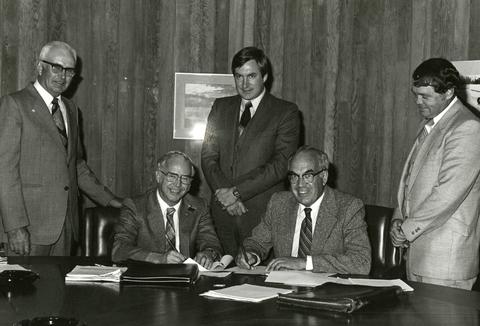 Board of Governors (Mount Royal University)

The Act to Incorporate Mount Royal College was passed on December 16th, 1910. However, the Board of Governors had their first meeting in August 1910 to establish an academic and financial plan for the college. At its inception, the full Board consisted of thirty-three members and met annually. The Executive Committee, which consisted of the four officers plus six regular Board members, met monthly and was given the authority to transact all of the business of the Board and College between meetings of the full Board of Governors. During Mount Royal's years as a private college, members of the Board of Governors were drawn primarily from the United Church network due to the school’s Methodist roots. This tendency changed after the college became public with Board members coming from a wider base including members of the Conservative Party, the Calgary Board of Education, and volunteers active in local health and community organizations. During the transition to a public college the Board briefly changes its name to the 'Board of Trustees' in order to take over the assets, liabilities, and administration of the private college. The name of the Board reverted back to the Board of Governors in January of 1970.

The Colleges Act of 1969 changed the composition of the Board to include the college president, a Board chair, six public members chosen by the Government, one member nominated by the Student's Association, and one member nominated by the Faculty Association. In 1982 the first support staff member was added to the Board of Governors making the total member number eleven. In 1972 the Board of Governors’ standing committees also underwent restructuring to include members of the faculty, student body, and administration for the first time. The 1990s saw another notable change to the composition of the Board as Mount Royal was actively trying to become a degree granting institution. Community volunteers were replaced with prominent business leaders who were considered to be strategically placed to push Mount Royal’s interests.

Currently the Board of Governors consists of thirteen members made up of the Board chair, the university president, a faculty representative, a support staff representative, the president of the Student’s Association, and eight public members. The Board continues to be directed by several statues and regulations that direct its responsibilities, the foremost being the Post-Secondary Leaning Act. The entire Board has an obligation to meet at least four times a year and one meeting must be opened to the public. The Board of Governors continues to carry out much of its work through standing committees, of which there are currently five: Academic Affairs Committee, Audit and Risk Committee, Finance Committee, Campus Development Committee, Governance and Nominating Committee, and the Human Resources Committee.

Fonds documents the governance functions and decisions of the Board of Governors of Mount Royal College. The fonds is arranged into three series which primarily contain meeting minutes from the Board of Governors, the Board of Trustees, and subcommittees and task forces that reported to the Board. Other records in the fonds include president and principal reports, agreements, proposals, statements of revenues and expenditures, auditor reports, correspondence, and documents relating to the transition to the Lincoln Park campus.