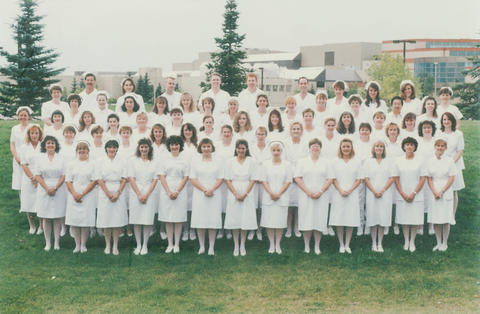 The School of Nursing and Midwifery is part of Mount Royal University's Faculty of Health, Community, and Education, and as of 2019 offers the following programs: Bachelor of Nursing, Bachelor of Midwifery, the Bridge to Canadian Nursing, and the Advanced Studies in Critical Care Nursing Certificate.

Mount Royal’s nursing program was launched in 1967 as a two-year diploma program under the directorship of Jean Mackie. At the time, the College's Diploma Nursing Program was controversial because previously most nursing education had consisted of either apprenticeship programs run by hospitals or four-year degree programs taught in universities. However, the program grew and gained acceptance over several decades, eventually expanding to include certificate programs in specialty areas of nursing including: operating room and intensive care nursing, post-basic mental health nursing, occupational health nursing, extended care nursing, and gerontological nursing. The Diploma Nursing Program continued until 1993, with the last cohort graduating in 1995.

In the 1980s, the Nursing and Allied Health Department started to explore options for offering a nursing degree program through Mount Royal College. After several years of research and planning, an agreement was reached in 1992 through which the three nursing programs offered in Calgary were merged into one program, the Calgary Conjoint Nursing Program (CCNP), a collaborative baccalaureate program offered by Mount Royal College, the University of Calgary, and the Foothills Hospital School of Nursing. The program launched in 1993 with the first class of students graduating in 1997. The program offered classes at all three institutions and students had the option of completing either a four-year Bachelor of Nursing degree or a two-year nursing diploma. The Calgary Conjoint Nursing Program was initially only approved for a six-year trial period, but the partnership continued for eleven years, with the last students graduating in 2004.

As the Calgary Conjoint Nursing Program wound down and the last intake of students occurred in 2000, the Mount Royal College Centre for Health Studies sought out other partnerships in order to continue to provide a Bachelor of Nursing option without interruption to student enrollment. They eventually reached an agreement with Athabasca University in 2000, which allowed Mount Royal to provide university-level nursing courses at the Lincoln Park campus taught by Mount Royal faculty. The Athabasca University at Mount Royal College (AU @ MRC) Bachelor of Nursing program officially launched in 2001 and ran until 2013, with the last intake of students into the program occurring in 2010.
The partnership with Athabasca University allowed Mount Royal College to continue to provide university-level nursing education while it pursued independent degree-granting status.

The image linked to this description is a photograph of the last graduating class of the Diploma Nursing Program (Item 0108-01).