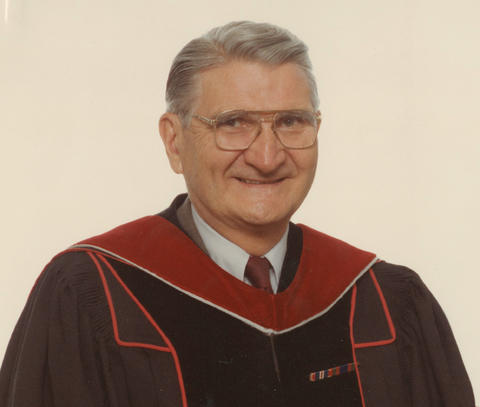 Wilk held a Bachelor of Science in Agriculture, a Bachelor of Divinity, and a Doctor of Ministry, and was a historian primarily focused on the history of Alberta. He was an active member of several local historical societies including the Nose Creek Historic Society, and was involved with local archives, museums, and heritage preservation efforts. He was the author/editor of several books on local history including "One Day's Journey", a history of the Airdrie District, "Pioneers of Faith", a history of the Airdrie United Church, and "100 Years of Nose Creek Valley History".

In addition to his work as a historian, Wilk was a United Church of Canada minister (since 1952) and served as a medic with the Royal Canadian Navy during World War II. Stephen Wilk died on November 12, 2006.

More of Wilk's records can be found in the Stephen Wilk Airdrie History collection held by the Glenbow Museum.

The photograph linked to this description is a photograph of Stephen Wilk from file 0202-01 - Book style MRC [Mount Royal College] history.