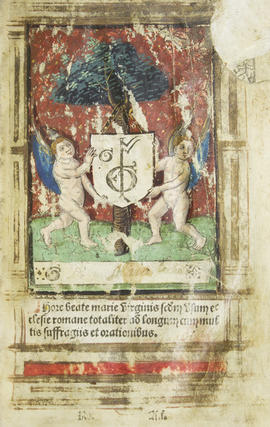 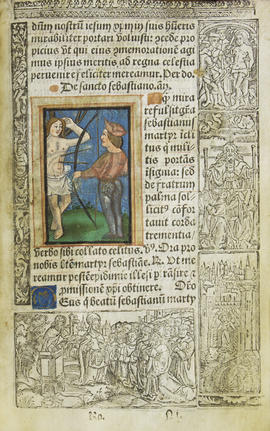 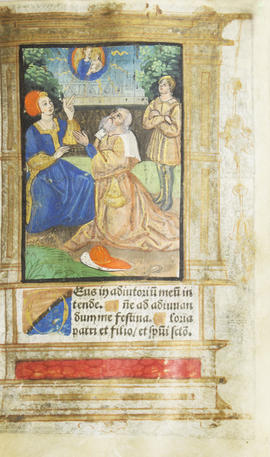 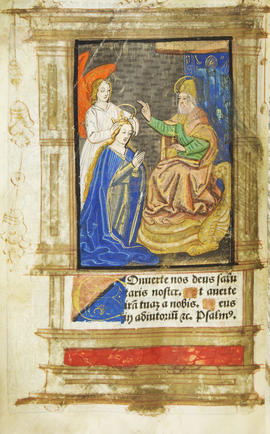 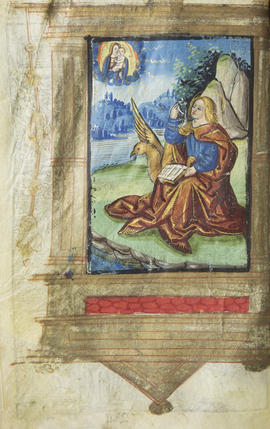 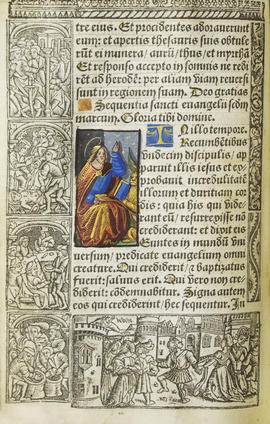 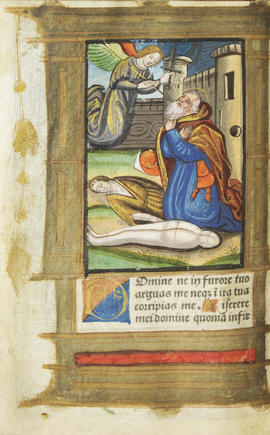 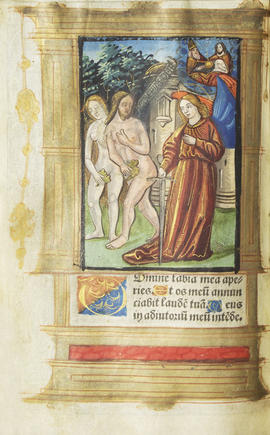 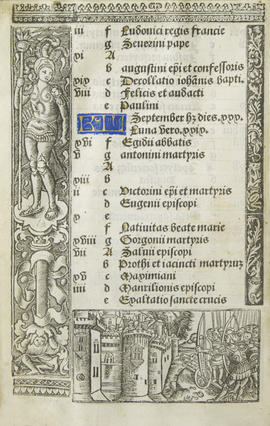 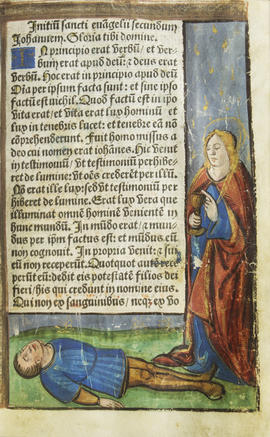 Item is an illuminated book of hours printed in Paris at the workshop of the brothers Gilles and Germaine Hardouyn, printers and illuminators who specialized in books of hours. The book is printed on octavo vellum leaves, with most of its 194 pages containing 23 lines of black letter text. Text pages are decorated with a variety of historiated and ornamental metalcut borders (depicting allegorical, biblical, or other religious scenes) and initials illuminated in gold on blue or red grounds. It also features 29 metalcuts overpainted to look like miniatures, including 12 large and 13 small illustrations, and 4 historiated borders. The book also features a 17th century French citron morocco binding, tooled in gilt to a panel design with drawer-handle and volute tools. Text is in Latin, with a colophon at the end in Middle French.

TEXT:
The following is a list of the texts and other elements that make up the book of hours. The folio/folio span of the text is given first as: arrangement letter, folio number, recto/verso. For example, A1r means the recto (front side) of folio A1 (the first leaf of the first arrangement, lettered A). B2v-B5v means that the text spans from the verso (back side) of folio B2 to the verso of B5. Please note that only the first two folios of each arrangement have signatures printed on the bottom of the page (ex: A.i., A.ii.).

I5r-K1r Litany of the Saints

K1v-M1r Office of the Dead

M1r-N5v Suffrages of the Saints

N5v-N8r Hours of the Immaculate Conception

N8v Table of contents and colophon

ILLUSTRATIONS:
The book is illustrated with 29 metalcut prints that are overpainted to look like miniatures. These include 12 large metalcuts (set in gold and red ink architectonic frames with dangling cords and tassels), 4 historiated metalcut borders, and 13 small metalcuts.

B2v Large metalcut: Saint John the Evangelist on the island of Patmos with a vision of the Virgin and Child in the sky. John has his gospel on his lap and is accompanied by an eagle, his evangelist symbol.

B4r Small metalcut: Saint Luke reading his gospel at a desk, accompanied by his symbol the bull.

B5v Small metalcut: Saint Mark with his gospel being held by a winged lion, his evangelist symbol.

C5v Large metalcut: The Expulsion from the Garden. Adam and Eve, covering themselves in shame, are expelled from the Garden of Eden by an angel with a sword, with God the Father and Christ above.

C6r Large metalcut: The Annunciation. The Angel Gabriel appears to Mary to announce that she will bear Christ, while the Holy Spirit descends on Mary in the form of a dove from God the Father.

D7r Large metalcut: Augustus and the Tiburtine Sybil. The Roman emperor consults the prophetess, who reveals a celestial vision of the Virgin and Child, while a young man looks on.

E4v Historiated metalcut border: Christ before Pilate. Christ stripped and wearing the crown of thorns being clothed in a purple robe by Pilate’s soldiers before the Crucifixion, while Pilate watches from above. At lower right, a bishop, friar, and other clergyman venerate Christ.

E5r Large metalcut: Pentecost. The Holy Spirit descends as a dove from Christ and God the Father onto the Virgin and the apostles.

F2r Large metalcut: The Annunciation to the Shepherds. An angel appears in the sky to three shepherds (one playing the bagpipes) tending their flock to announce the birth of Christ.

F5r Large metalcut: The Adoration of the Magi. The three magi present gifts to the infant Christ held by Mary in the stable.

F8r Large metalcut: The Presentation of Jesus at the Temple. The infant Christ lies on an altar accompanied by Simeon the high priest, Mary, Anna the prophetess, and a man dressed in a habit.

G2v Large metalcut: The Massacre of the Innocents. Two soldiers seize and kill infants while King Herod on his throne and several women look on.

G6v Large metalcut: The Coronation of the Virgin. An angel places a crown on Mary’s head while God the Father, enthroned and holding an orb, blesses her.

H7v Large metalcut: King David repenting. A kneeling David prays for forgiveness outside the walls of Jerusalem with two bodies (of plague victims?) at his feet, while an angel descends bearing a sword and arrow.

H8r Historiated metalcut border: King David observing Bathsheba bathing. Bathsheba rises naked from her bath, with a seated figure at her feet, while David watches from a window above.

K1v Historiated metalcut border: A naked corpse awaiting burial lying on a shroud beside a churchyard cross and a wooden grave marker.

M6v Small metalcut: Saint John the Evangelist holding his gospel accompanied by an eagle, with a celestial vision of the Virgin and Child.

N1r Small metalcut: The Martyrdom of Saint Sebastien, in which the saint is being executed with arrows by an archer.

N2r Small metalcut: Saint Nicholas in bishop’s robes making the sign of the cross over three resurrected children who are stepping out of a pickling barrel.

N3v Small metalcut: Saint Anne teaching Mary how to read from a book.

N4r Small metalcut: Saint Catherine of Alexandria holding a sword and a book.

Most pages are decorated with ornamental metalcut borders depicting a variety of allegorical, biblical, historical, or religious scenes.