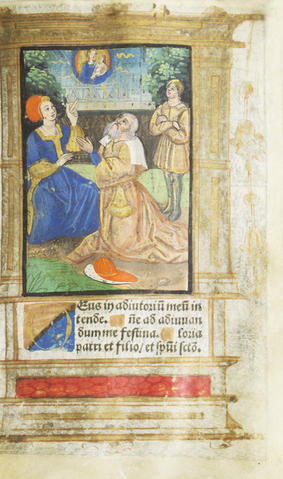 D7 recto. Features an overpainted metalcut of Augustus and the Tiburtine Sybil. The Roman emperor consults the prophetess, who reveals a celestial vision of the Virgin and Child, while a young man looks on. According to medieval legend, when Augustus consulted the Sibyl about whether he should accept apotheosis (recognition as a god after his death), she prophesied the coming of Christ and revealed a vision of the Virgin and Child on the site of the future Church of Santa Maria in Aracoeli in Rome.