Fonds documents the fundraising efforts and other activities of the Mount Royal University Foundation. Fonds is arranged into three series: financial statements, Foundation reports, and the Minding the Future speaker series. The fonds also contains supper invitations, brochures, a strategic plan, and other material. 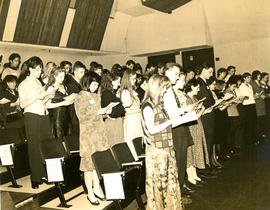 Fonds documents the activities of the local chapter of the Phi Theta Kappa honour society (Alpha Upsilon Delta) during the time it was active at Mount Royal College. The fonds includes one series (Membership records), records relating to the chartering process, executive committee elections and governance, as well as newsletters and awards.