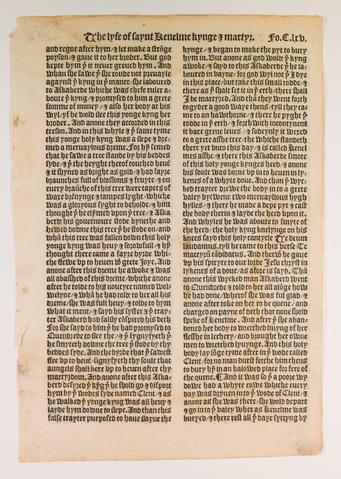 The text approximately reads: "...and reign after him, and let make a strong poison, and gave it to her brother. But God kept him that it never grieved him. And when she saw that she could not prevail against the king in that manner, she laboured to Askeberd, which was chief ruler about the king, and promised to him a great sum of money, and also her body at his will, if he would slay this young king her brother, and anon they accorded in this treason.

And in this while, and at that same time, this young holy king was asleep, and dreamed a marvellous dream. For him seemed that he saw a tree stand by his bedside, and that the height thereof touched heaven, and it shined as bright as gold, and had fair branches full of blossoms and fruit. And on every branch of this tree were tapers of wax burning and lamps alight, which was a glorious sight to behold. And him thought that he climbed upon this tree and Askeberd his governor stood beneath and hewed down this tree that he stood on. And when this tree was fallen down, this holy young king was heavy and sorrowful, and him thought there came a fair bird which flew up to heaven with great joy. And anon after this dream he awoke, and was all abashed of this dreme, which anon after, he told to his nurse named Wolweline. And when he had told to her all his dream, she was full heavy, and told to him what it meant, and said his sister and the traitor Askeberd had falsely conspired his death. For she said to him that he had promised to Quendred to slay thee, and that signifieth that he smiteth down the tree that stood by thy bedside. And the bird that thou sawest flee up to heaven, signifieth thy soul, that angels shall bear up to heaven after thy martyrdom. And anon after this, Askeberd desired the king that he should go and disport him by the wood's side named Clent; and as he walked, the young king was all heavy and laid him down to sleep, and then this false traitor purposed to have slain the king, and began to make the pit to bury him in. But anon, as God would, the king awoke, and said to this Askeberd that he laboured in vain, for God will not that I die in this place. But take this small rod, and thereas thou shalt set it in the earth, there shall I be martyred. And then they went forth together, a good way thence, till they came to a hawthorn, and there he pight the rod in the earth, and forthwith incontinent it bare green leaves, and suddenly it waxed to a great ash tree, the which standeth there yet unto this day, and is called Kenelm's ash. And there this Askeberd smote off this holy young king's head. And anon, his soule was borne up into heaven in likeness of a white dove. And then the wicked traitor drew the body into a great valley between two hills, and there he made a deep pit and cast the body therein, and laid the head upon it. And whilst he was about to smite off the head, the holy king, kneeling on his knees, said this holy canticle: Te Deum laudamus, till he came to this verse: Te martyrum candidatus, and therewith he gave up his spirit to our Lord Jesu Christ in likeness of a dove, as afore is said. Then anon this wicked man Askeberd went to Quendred, and told to her all along how he had done, whereof she was full glad, and anon after, took on her to be queen, and charged, on pain of death, that no man should speak of Kenelm. And after that she abandoned her body to wretched living of her flesh in lechery, and brought her own men to wretched living. And this holy body lay long time after in that wood called Clent, for no man durst fetch him thence to bury him in hallowed place for fear of the queen Quendred.

And it was so that a poor widow lived thereby, which had a white cow, which was driven in to the wood of Clent. And anon as she was there she would depart and go into the valley where Kenelm was buried, and there rest all the day sitting by..."