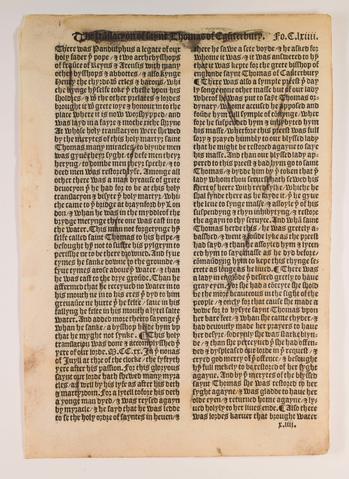 The text approximately reads: "There was Pandulphus, a legate of our holy father the pope, and two archbishops of France, of Rheims and Arles, with many other bishops and abbots, and also king Harry the Third with earls and barons, which king himself took the chest upon his shoulders, and with the other prelates and lords, brought it with great joy and honour in to the place where it is now worshipped, and was laid in a fair and much rich shrine. At whose holy translation were showed, by the merits of this holy martyr, S. Thomas, many miracles. To blind men was given their sight, to deaf men their hearing, to dumb men their speech, and to dead men was restored life.

Among all others there was a man, because of great devotion that he had to be at this holy translation and visit the holy martyr, which came to the bridge at Brentford by London; and when he was in the middle of the bridge, meeting there one, was cast into the water. This man, not forgetting himself, called S. Thomas unto his help, and besought him not to suffer his pilgrim to perish, ne to be there drowned. And five times he sank down to the ground, and five times arose above the water, and then he was cast to the dry ground. Then he affirmed that he received no water into his mouth, ne into his ears that did to him grievance ne hurt that he felt, save in his falling he felt in his mouth a little salt water; and added more thereto, saying that, when he sank, a bishop held him up that he might not sink.

This holy translation was done and accomplished the year of our Lord twelve hundred and twenty, in the nones of July, at three o'clock, in the fiftieth year after his passion. For this glorious saint our Lord hath showed many great miracles, as well by his life, as after his death and martyrdom. For a little tofore his death a young man died and was raised again by miracle. And he said that he was led to see the holy order of saints in heaven, and there he saw a seat void, and he asked for whom it was, and it was answered to him that, it was kept for the great bishop of England, S. Thomas of Canterbury. There was also a simple priest that daily sang no other mass but of our Lady, whereof he was put to S. Thomas his ordinary, whom accused, he opposed, and found him full simple of conning, wherefore he suspended him, and inhibited him his mass. Wherefore this priest was full sorry, and prayed humbly to our blessed Lady that he might be restored again to say his mass. And then our blessed Lady appeared to this priest, and bade him go to S. Thomas, and bid him by the token that the lady whom thou servest hath sewed his shirt of hair with red silk, which he shall find there as he laid it, that he give thee leave to sing mass, and assoil thee of his suspending and thine inhibiting, and restore thee again to thy service. And when S. Thomas heard this he was greatly abashed, and went and found like as the priest had said, and then assoiled him to say mass as he did before, commanding him to keep this thing secret as long as he lived.

There was a lady in England that desired greatly to have grey eyes, for she had a conceit that she should be the more beauteous in the sight of the people; and only for that cause she made a row to visit S. Thomas upon her bare feet. And when she came thither, and had devoutly made her prayers to have her desire, suddenly she wax stark blind, and then she perceived that she had offended and displeased our Lord in that request, and cried God mercy of that offence, and besought him full meekly to be restored of her sight again. And by the merits of the blessed S. Thomas she was restored to her sight again, and was glad to have her old eyes, and returned home again, and lived holy to her life's end. Also there was a lord's carver that brought water..."