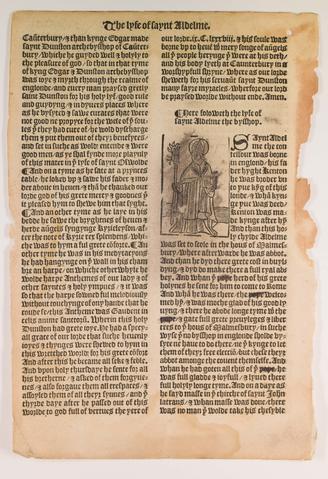 Text approximately reads: " ...Canterbury, which he guided well and holily to the pleasure of God, so that in that time of king Edgar, and Dunstan archbishop, was joy and mirth through the realm of England, and every man praised greatly S. Dunstan for his holy life, good rule, and guiding. And in divers places, whereas he visited and saw curates that were not good, ne propice for the weal of the souls that they had cure of, he would discharge them and put them out of their benefices, and set in such as would entend and were good men, as ye shall find more plainly of this matter in the life of S. Oswald.

And on a time as he sat at a prince's table, he looked up and saw his father and mother above in heaven, and then he thanked our Lord God of his great mercy and goodness that it pleased him to show him that sight. And another time as he lay in his bed he saw the brightness of heaven, and heard angels singing Kyrie eleison after the note of Kyrie rex splendens, which was to him a full great comfort. And another time he was in his meditations, he had hanging on the wall in his chamber an harp, on which otherwhile he would harp anthems of our Lady, and of other saints, and holy hymns, and it was so that the harp sounded full melodiously without touching of any hand that he could see, this anthem was, Gaudent in celis animæ sanctorum, wherein this holy saint Dunstan had great joy. He had a special grace of our Lord that such heavenly joys and things were showed to him in this wretched world for his great comfort. And after this he became all sick and feeble, and upon holy Thursday he sent for all his brethren and asked of them forgiveness, and also forgave them all trespasses and assoiled them of all their sins, and the third day after he passed out of this world to God, full of virtues, the year of our Lord nine hundred and eighty-eight. And hls soul was borne up to heaven with merry song of angels, all the people hearing that were at his death. And his body lieth at Canterbury in a worshipful shrine, whereas our Lord showeth for his servant S. Dunstan many fair and great miracles, wherefore our Lord be praised, world without end. Amen.

S. Aldhelm the confessor was born in England. His father highs Kenton; he was brother unto Ina, king of this land, and when king Ina was dead, Kenton was made king after him, and then this holy child Aldhelm was set to school in the house of Malmesbury, where afterward he was made abbot. And then he did there great cost in building and did do make there a full royal abbey. And when the pope heard of his great holiness, he sent for him to come to Rome, and when he was there the pope welcomed him and was much glad of his good living, and there he abode long time with the pope, and gat full great privileges and liberties to the house of Malmesbury, in such wise that no bishop in England should visit ne have to do there, ne the king to let them of their free election, but chose their abbot among the convent themselves. And when he had gotten all this of the pope he was full glad and joyful, and lived there holily a long time. And on a day he said mass in the church of S. John Lateran, and when mass was done, there was no man that would take his chasuble..."